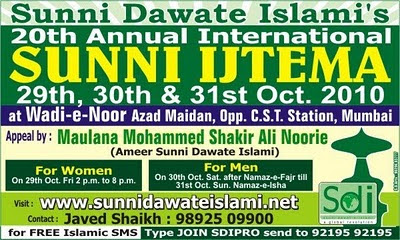 Posted by Unknown at 2:39 AM Links to this post

A reply to the objection of the practice of kissing of the thumbs (1)
Written by Mufti Ahmad Yaar Khan
Objection: All the Ahadith that have been presented in proof of the permissibility of the kissing the thumbs are weak (Zaeef) and rules of Shariah cannot be established from weak Ahadith. Imaam Sakhaawi, Imaam Mulla Ali Qaari and even Imaam Shaami have written in Maqaasid-e-Hasanaa, Mauzuaate-Kabeer and Raddul-Mukhtar respectively that all of the Ahadith narrated regarding this practice is not Sahih and Marfoo. The author of Roohul-Bayaan further rejects them being Sahih. Thus presenting them is futile.
Answer: There are a few replies to this,
1. All of these scholars refute these Ahadith being Marfoo (i.e. they are not Marfoo Sahih), proving that they are Mauqoof Sahih (an acceptable category of Hadith). As a result, after writing that these Ahadith are not Marfoo, Mulla Ali Qari states, “I say when this Hadith’s attribution (rafaa) is proven through Hadrat Siddique-e-Akbar, it is sufficient for practice because Rasulullah (Sallal Laahu Alayhi Wasallam) has said, “My Sunnah, as well as that of my Khulafaa, is necessary on you” – Mauzuaate Kabeer
This means that the Hadith is Mauqoof Sahih, which is adequate when proving something.
2. All of these scholars have said, “These Ahadith are not proven to be Marfoo until the Holy Prophet (Sallal Laahu Alayhi Wasallam) and not sound (Sahih)”. Not being Sahih, however, does not necessitate that the Ahadith are weak (zaeef) because the rank Hasan is still sufficient.
3. It is a rule of Usool-e-Fiqh and Usool-e-Hadith that if a weak Hadith is narrated through several Chains of Narration, it becomes Hasan. Discussing the duas of the body parts in Wudhu, Allamah Haskafi writes, “This Hadith is narrated by Ibn Hibban, etc. through various Chains of Narration (isnaad)” – Durr-e-Mukhtar, Vol. 1, Baabu Mustahabaatil-Wudhu
Allamah Shaami states under this, “Some chains of Narration strengthen others. Consequently, this Hadith has reached the rank of Hasan”
In the previous chapter on this issue, we have proven that this Hadith is narrated through many chains. Thus, it is Hasan.
4. Even if this Hadith is accepted to be weak, still too is a weak Hadith acceptable in the excellence of practice. Allamah Shaami wites discussing the instances of Azaan, “To act upon a weak Hadith in connection to the excellence of practice is permissible.” – Raddul-Mukhtar, Vol. 1, Baabul-Azaan.
Here too, is there no issue of this practice being Waajib, or Haraam if not done. The Hadith speaks of the excellence of kissing the thumbs. Therefore, a weak Hadith is sufficient for bringing practice upon. Also, the pratice of Muslims strengthens a weak Hadith. Discussing Talqeen (encouraging the recitation of the Kalima) to the deceased, Imaam Nawawi states, “The Hadith about making Talqeen to the deceased does not have a strong Chain of Narration. However, it is strengthened through the practice of the people of Syria and other proofs.” – Kitaabul-Azkaar. Refer to the books Noorul-Anwaar, Tanzeeh, etc. for more insight into this rule.
5. Even if there was no Hadith mentioned about this practice, then still too is the Muslim Ummah’s acceptance of it being preferable (Mustahab) a sufficient proof, because the Hadith states, “Whatever is accepted to be good by Muslims is good in the sight of Allah Ta’ala”
6. Kissing the thumbs is a practice (amal) to save one’s self from the sickness of the eyes. The experience of the Sufiya is sufficient in proof of amals. Sha Waliyullah states, “The path of ijtihaad is open with regards to the variant (tasreefi) practices, e.g. doctors making prescriptions.” – Hawaamia
Sha Waliyullah, himself has written several amals and taweezs in his book, Al-Qawlul-Jameel, etc. From which Ahadith are these amals and taweezs proven for you? Allamah Shaami has also written many methods and practices concerning being saved from black-magic, finding a lost object, etc. in his book Raddul Mukhtaar. Where are the Ahadith which substantiate these practices? When we have proven in the first chapter that this kissing of the thumbs is beneficial for the removal of pain from the eyes, why do you still prohibit it?
7. In the previous chapter, we have proven that Shaami, Sharah Naqaayah, Tafseer Roohul-Bayaan, etc. have accepted kissing the thumbs to be Mustahab. It should be understood that they are not criticizing the practice being Mustahab, but merely refuting the Hadith being Marfoo. This proves that the classification of it being preferable (Mustahab) is absolutely correct.
8. Very well, even if we accept that a weak Hadith does not prove something being Mustahab, where is the Hadith which proves that this action is Makrooh? In other words, produce a Hadith which states, “Kissing the thumbs is Makrooh,” or “Do not kiss the thumbs,”, etc. Insha-Allah, never mind a Sahih Hadith, you will not be able to find even a weak one to prove dislike. You only base your stance on the thinking of your friends and enmity of Sayyiduna Rasulullah (Sallal Laahu Alayhi Wasallam).
May Allah the most exalted be pleased with the scholars, the lights of the religion of Islam.
Extracted from 'JAA’AL HAQQ WA ZAHAQAL BAATIL'
Posted by Unknown at 12:54 AM Links to this post