WHAT ANIMALS MUST BE USED FOR QURBANI?

WHO SHOULD MAKE QURBANI?

It is Waajib for every Muslim male and Muslim female who:- has attained puberty (Baaligh) is of sound mind (not insane) possesses Nisaab for that moment in time, not necessarily for one Islamic calendar year (Nisaab is the value of excess wealth which makes a Muslim liable for Zakaah i.e. The possession of, or equivalent capital value of seven and half tolas gold (+ -3 ounces) or fifty two tolas of silver (+ - 20 ounces) To make sacrifice in the Name of Allah It is Waajib according to Imam-e-Azam Abu Hanifa (radi Allahu anhu) and Sunnat-e-Mu'akidda according to other Imams for Muslims to make Qurbani. It is Waajib only for each Muslim male and female to make Qurbani for himself or herself; and not Waajib for him or her to make Qurbani for any other member of his or her family. It is only his or her duty to guide or instruct them to make Qurbani if they meet with the conditions of item in 1. above. In the same manner as Sadaqat-ul-Fitr, Qurbani is a Waajib obligation for Muslims every year on the occasion of Eid-ul-Adha. It is not a once in a life-time duty. It is permissible to make Qurbani in the name of Rasoolullah (sallal laahu alaihi wasallam) and his Ummah or any other deceased Muslim as a Nafil Qurbani on condition that the person making the Nafil Qurbani has discharged his obligation in his own Waajib Qurbani first. It is not Waajib or necessary for the following people to make Qurbani:- one who has not attained puberty (not Baaligh) even if he or she possesses Nisaab. A traveller (who is not yet Muqeem). One who does not possess Nisaab during that specific period in time. On who may be in possession of Nisaab bit has turned insane. Any Muslim male or female who is not liable for Qurbani but purchases an animal for Qurbani for the sake of Almighty Allah, then the Qurbani becomes Waajib for him. Qurbani cannot be undertaken on behalf of another person upon who Qurbani is Waajib, without his or her prior consent.
Posted by Unknown at 10:22 AM Links to this post

QURBANI: SOME IMPORTANT MASAA'IL WHY SHOULD ONE MAKE QURBANI? 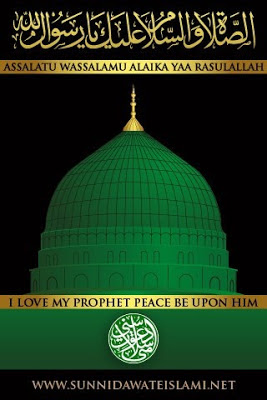 According to Tirmizi Shareef and Sunan Ibn Majah, Hazrat Ayesha (radi Allahu anha) stated that Rasoolullah (sallal laahu alaihi wasallam) said, "The son of Adam does not do any action on the day of Qurbani which is more pleasing to Allah than the sacrifice of animals; and he will come on the day of Qiyamah with it's hairs, horns and hooves (for reward); and the blood (of the sacrificed animal) certainly reaches Allah before it falls down to the ground. So make yourselves purified therewith." In another Hadith related in Sunan Ibn Majah, Zaid bin Arqam reported that the companions of Rasoolullah (sallal laahu alaihi wasallam) asked, "Oh! Messenger of Allah, what is this sacrifice?" He said, "The way of your forefather (Prophet) Ibrahim (alaihis salaam)." They said, "What is for us therein, O! Messenger of Allah?" He said, "There is one reward for every hair." They said, "For wool, O! Messenger of Allah?" He said, "There is one reward for every strand of wool!" WHEN MUST QURBANI BE MADE? Qurbani or Sacrifice is carried out from the 10th of Zil- Hijjah (i.e. from the day of Eid-ul-Adha) after the completion of the Eid Salaah and Khutba, till sunset on the 12th of Zil- Hijjah. The times of preference for Qurbani are the first day, i.e. the 10th of Zil-Hijjah from the completion of the Eid Salaah, followed by the second day and lastly the third day. If for some reason, animals purchased for Qurbani are not slaughtered in the time and duration of the Qurbani period, i.e. 10th, 11th & 12th of Zil-Hijjah, then such animals must be donated alive to charity.
Posted by Unknown at 10:19 AM Links to this post 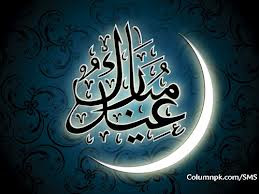 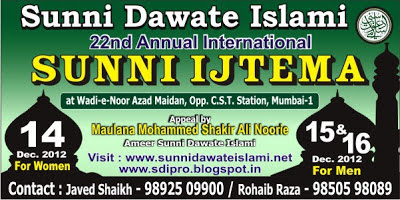 Posted by Unknown at 10:30 AM Links to this post

Posted by Unknown at 11:13 PM Links to this post 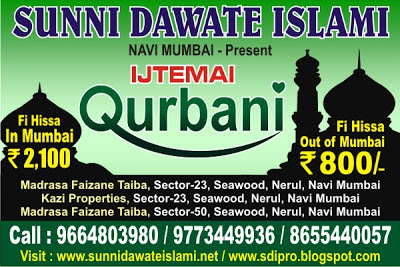 Posted by Unknown at 11:12 PM Links to this post