IMAM AHMED RAZA AS THE MUJADDID OF THE 14TH CENTURY 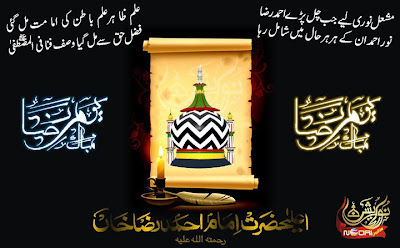 IMAM AHMED RAZA AS THE MUJADDID OF THE 14TH CENTURY

Undoubtedly, besides being recognised as a great Wali, as the Ghousul Azam and as the Imam Abu Hanifa (alaihir rahmah) of his time, A'la Hadrat (alahir rahmah) was also the Mujaddid (Reviver) of Islam of the 14th Century. He possessed all the conditions of a Mujaddid and his entire life was spent trying to revive the Deen of the Holy Prophet Muhammad (sallal laahu alaihi wasallam).

A cloud of darkness had covered most of the world and the false concepts of Polytheism (Shirk) and Innovations (Bid'at) were coming into existence. The Muslims were in a state of confusion. They were surrounded by the cloud of Kufr (Disbelief), Shirk and Bid'at. It is through the Divine Grace of Almighty Allah and the Sadaqah of the Holy Prophet (sallal laahu alaihi wasallam) that the Reviver of the 14th Century, Imam-e-Ahle Sunnat, Imam Ahmed Raza Khan (alaihir rahmah) shone like the sun. With his bright proofs, he destroyed the darkness of Kufr and revived Islam.

Professor Manzoorud'deen Ahmad, Vice Chancellor, University of Karachi said: "The reality is that on reading several books of Imam Ahmed Raza, I have come to the conclusion that through his writings and speeches, the Fatawa (Inquisitions) and hundreds of small and bulky treatises, he had struggled for the revival of Islam, and as a reward he was declared as a Mujaddid of his Century by the Ulema (Scholars of Islam), in particular, the scholars of Makkah and Madina (Haramain Sharifain). . ."

A Hadith recorded in Mishkaat Shareef and quoted by Sayyiduna Abu Hurairah (alaihir rahmah) who says that the Holy Prophet (sallal laahu alaihi wasallam) said: "VERILY, AT THE END OF EVERY CENTURY, ALMIGHTY ALLAH WILL SEND SUCH A PERSON TO THE UMMAH, WHO WILL REVIVE THE DEEN FOR THE THEM (THE UMMAH)."

In other the words, when there comes a period in which there is a shortage of knowledge and a deterioration in following of the Sunnah; when there is an increase in false innovations and ignorance; then Almighty Allah will send a person at the beginning or end of every century who will show the difference between Sunnah and Bid'at. He will refute and destroy false innovations and will fear none but Almighty Allah. He will very bravely and sincerely hoist the flag of Deen-e-Muhammadi (sallal laahu alaihi wasallam). Such a person is known as a "Mujaddid" (Reviver) of Deen.

Allamah Munaadi (alaihir rahmah) states:"A Mujaddid is one who separates Sunnah from Bid'ah and one who degrades the status of the Ahle Bid'ah."

Why does a Mujaddid come after 100 years? A Mujaddid is sent after every 100 years because after every century the surroundings, the environment, the manner of thinking and ways of the people tend to pass through a massive transformation. It has been stated in the Hadith of Bukhari Shareef that during the latter stages of the Prophet's (sallal laahu alaihi wasallam) physical life, one night, after performing Esha Salaah, he stood up and said, "Should I inform you of the importance of this night? From this night onwards, right up to the end of a 100 years, that person who is alive on the earth (presently) will not be alive."

Can their be more than one Mujaddid to a century? Yes. There can be more, and there has already been more than one Mujaddid to a Century. In the Hadith, the Arabic word that is used to explain the coming of the Mujaddid is in the singular tense, but according to the meaning, it is a plural as it has been explained in the Kitaabs of Usool-e-Fiqh. Allamah Mulla Ali bin Sultan Qaari (alaihir rahmah) who is the Mujaddid of the 11th Century says, "From the words, not only one single person is implied, but the implication is towards a group of people, from amongst whom each one is reforming a single type of knowledge or all types of knowledge in his city."

A LIST OF KNOWN MUJADDIDS FROM THE FIRST CENTURY:

IMAM AHMED RAZA'S JIHAD AGAINST THE INSULTERS OF SAYYIDUNA RASULULLAH (SALLAL LAAHU ALAIHI WASALLAM)
Posted by Unknown at 3:37 AM Links to this post