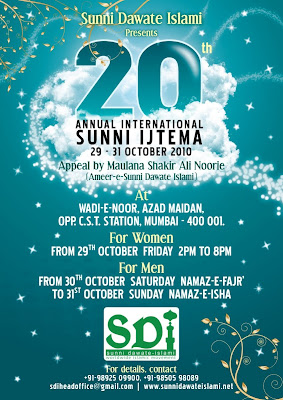 Posted by Unknown at 8:15 AM Links to this post


Voluntary Prayers of 15th of Sha'ban

On the night, after Isha prayer offer twelve raka’at with six salaams (3 sets of 2 raka’at each). In every raka’at after 'Al-ham-du' recite ‘Sura Ikhlas’ fifteen times. After completion of namaaz, recite Darood Sharif seventy times and offer repentance of sins committed.

In this month after every namaaz reciting this duaa is good for freeing oneself from sins :

On the night of first Friday of Sha’baan (the night that follows Thursday), after Ishaa namaaz, offer eight raka’at with two salaams (2 sets of 4 raka’at each) and in each raka’at, after 'Al-ham-du'-ham-du’ recite ‘Sura Ikhlas’ eleven times, and offer its sawaab to Hazrat Fatima (Allah be pleased with her), daughter of Allah’s Messenger. She has said that she will not step into Paradise without taking those with her, who offer this namaaz.

In the first Friday night (the night that follows Thursday), after Ishaa namaaz, offer four raka’at namaaz with one salaam (1 set of 4 raka’at) and in each raka’at, after 'Al-ham-du' recite ‘SuraIkhlas’ threetimes. Allah will give him/her reward of Umrah.

On the first Friday of this month, after magrib prayer but before Ishaa, offer two raka’at, and in each raka’at, after 'Al-ham-du' recite ‘Aayatul Kursi’ once, 'Qul-hu-wal-lah' ten times, ‘Sura Falaq’ once and ‘Sura Naas’ once. Allah willing this namaaz will prove beneficial indevelopment of Imaan (faith). (Auraad-o-Namaaz) .

On the Day of Judgement the Almighty Allah will pay special attention on the one who offers this namaaz. Recite the Holy Qur’aan, Darood Sharif, Salaatut-tasbeeh and other wazaaif in Shab-e-Baraat.


SOME MORE NAWAFIL NAMAAZ OF SHA’BAAN

Allah’s Messenger says “The one who offers twelve taka’at (5 sets of 2 raka’at each) in the first night of Sha’baan, in each raka’at, after 'Al-ham-du'-ham-du’ recites 'Qul-hu-wal-lah' five times, then Almighty Allah will give him reward of twelve thousand years will be recorded in his name and he will become free from sins as if he was born that day.”